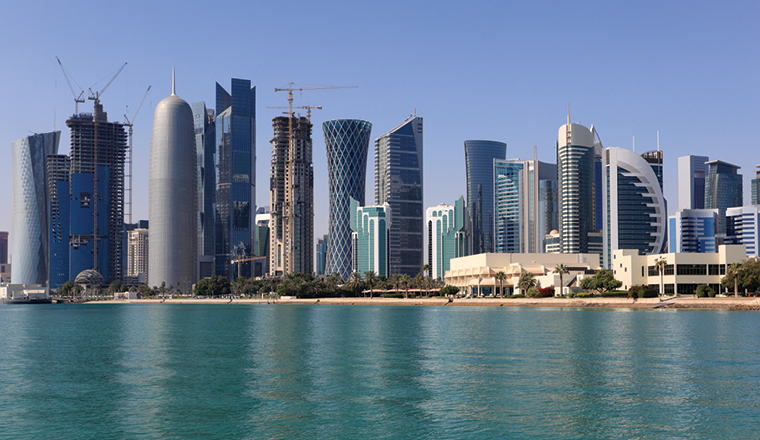 The Gulf was plunged into crisis in early June after Qatar came under a wave of sanctions led by Saudi Arabia that has already led to heavy selling in Qatari assets, and market analysts are trying to decipher if this will be a long and drawn out event.

But the denial did not placate Iran’s arch-rival Saudi Arabia, which cut diplomatic and economic ties with Qatar.

Saudi Arabia’s foreign minister Adel bin Ahmed Al-Jubeir said at the start of June that Qatar must “implement the promises it made a few years back with regard its support of extremist groups, regards its hostile media and interference in affairs of other countries”.

Saudi’s sanctions include shutting its border to Qatar – marking a closure of Qatar’s only land border – leading to worries about price hikes and a shortage of food and long lines outside shops as Qataris stocked up.

An emerging market bond syndicate banker told EMEA Finance: “This came out of nowhere. I don’t think anyone in the market saw this coming at all.”

High hopes for quick results
There is hope among some analysts that the blockade will not last for too long.

“We see room for a conflict resolution,” said Trieu Pham, CEEMEA strategist at Mitsubishi UFG. “But the demands and therefore timing are highly uncertain. [The] magnitude of measures taken against Qatar, point to a solution rather sooner than later.”

The specific sanctions placed on Qatar by Saudi Arabia, the UAE, Bahrain and Egypt are the closure of transport links by air, sea and road into Qatar, kicking Qatari nationals out of their countries within two weeks, banning their own nationals from traveling to Qatar and the expulsion of Qatari forces from the coalition forces in Yemen.

“As more and more parties take the chance to line up behind their faction, it's clear this is not going to be resolved soon,” said a bond trader. “And so [we are seeing] another wave of heavy selling across GCC, with Oman the worst hit.”

Qatar assets dumped
In the immediate aftermath of the sanctions, Qatar’s 10 year debt hit a Z-spread of 140bp, which was 50bp wider than levels seen a few weeks earlier, according to the trader. At the short end, Qatar’s sovereign bonds widened by 40bp to 70bp in the first week of June, while at the long end they were 15bp to 20bp wider, flattening the curve.

“Implications for the Qatar government's finances are unclear,” said Fitch Ratings. “Like other sectors of the economy, the government directly or indirectly imports a large part of the goods and services it needs, which could delay a return to fiscal surpluses.”

Away from the sovereign, Qatar Reinsurance’s $450mn perpetual bond that printed in March sold off by 4.5 points and Ezdan’s $500mn five-year sukuk was down by five points at its lowest point.

But it is Qatar’s financial sector that has been hit the hardest. The country’s banks traded around 70bp to 100bp wide of the sovereign curve over the first week of June, with senior Qatari bank debt down around five points on their cash price.

The biggest fall came in the aftermath of media reports that the central banks of Saudi Arabia, the UAE and Bahrain had asked their banks to give details of their exposure to Qatar, and issued instructions not to increase exposure and not to process Qatari rials.

“With no doubt, the current crisis could have a meaningful negative impact on the Qatari financial system, given the net foreign liability position and the banks’ relatively high exposure to foreign markets on both sides of the balance sheet,” said Pham at MUFG.

Qatari banks’ foreign liabilities make up 35% of their total liabilities, with 46% of that made up by interbank borrowing and non-resident deposits, according to statistics from Standard Chartered Bank.

Foreign liabilities in the commercial banking system equalled $123bn at the end of 2016, equal to 81% of GDP, up from roughly $85bn in 2015, according to Moody’s estimates.

“The government has the firepower to cover the banking system for a while,” said a bond syndicate banker. “So it’s not an acute problem, though it will become far more of a strain if this carries on for a while.”

Moody’s cut Qatar’s rating from Aa2 to Aa3 at the end of May – on the eve of the crisis – blaming a weakening of the sovereign’s external debt to GDP levels and uncertainty around how medium term growth will be generated.

The ratings agency warned on June 8 that "a prolonged or deepening rift between Qatar and its GCC neighbours would potentially have a more marked financial effect and increase funding costs for the sovereign and other Qatari entities”.