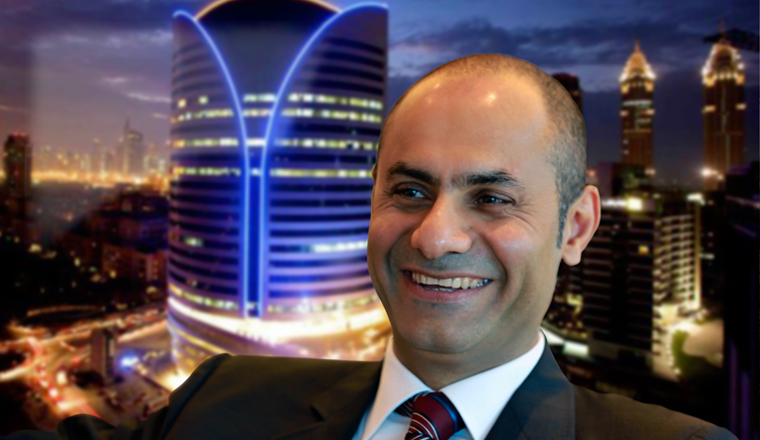 The finance boss continues to keep a careful eye on cash after moving the company's stock market listing from London back home to Dubai. By Tim Burke.

During the past 18 months international investors in the debt and equity markets have had the opportunity to buy into the potential of Damac’s work in Dubai and elsewhere (it has projects in several other Middle Eastern countries). In December 2013 the company listed global depositary receipts (GDRs) on the London Stock Exchange. The deal was the largest listing from a Middle Eastern company since that of DP World in 2007, raising about US$380mn and valuing Damac at US$2.65bn.

A few months later the company made its debut in the Islamic capital markets, securing US$650mn with a sukuk that attracted orders of almost US$3bn.

Such dealmaking has kept Adil Taqi, Damac’s chief financial officer, on his toes. Taqi joined the company in late 2006 after a career in banking. He left the group in 2011 to become chief executive of the Muriya Tourism Development Company in Oman before returning to Damac as CFO in 2013. He also oversees business development.

Speaking to EMEA Finance shortly after Damac joins the Dubai Financial Market, Taqi admits to a “virtual hangover” (“I don’t drink, that’s a metaphor”) from celebrating the listing. But it will soon be back to the hard work, and the finance boss has his priorities in order.

Time to look beyond banks
Real estate in the UAE has seen ups, downs and ups again. When Taqi joined Damac the company was riding high on the good times as real-estate prices rocketed. Holding on during that ride might sound like a breeze, but Taqi says it presented its own problems.

“The company was experiencing growth on a daily basis,” he says. “To manage the growth at that pace is quite challenging. You’re always playing catch-up on just about everything – on customer service, on construction, on finance and IT. The growth was just phenomenal, and the company kept investing in the infrastructure to be able to cope with that growth.”

The global financial crisis and bursting of Dubai’s property bubble put an end to that kind of growth. Rising real-estate prices could never have lasted, Taqi says today, but that knowledge didn’t make handling the crash any easier.

Taqi says it had been clear to him since joining Damac that the company needed to diversify its funding sources. He’d come from banking and was naturally conservative (“Banking isn’t the most adventurous industry in the world”), so wanted Damac to tap new sources of capital and be more careful with its cash. The slump in 2008 and 2009 proved the urgency of that strategy.

“When we had the crisis, we had this fantastic story and a fantastic company but no one in the external world with any sizeable and sensible amount of capital either understood us or believed us – or maybe a combination,” Taqi says. “At that time we as a management team and my personal agenda was to diversify the investor base. We said we were too big to be dependent on the moods of a few corporate bankers that worked in a single economy that was exposed to real estate. If you look at where we are today, we stuck to the course – from an investor and funding-base point of view we’re quite a diversified company.”

Back out or stick with it
The debt market wasn't developed enough for Damac’s needs then, Taqi says – to an extent, he adds, still isn’t – and so the equity market was the preferred source of new capital. The Damac team planned to take the company public in 2008, but hardly had a chance to meet investors before the collapse of Lehman Brothers rocked financial markets. “I’ve never seen appointments getting cancelled as fast,” Taqi recalls. “The rest is history.”

The deal might have died, but the drive didn’t. “We never lost the desire, ambition or objective [to list the company],” Taqi adds. “After the crisis I think we were a more convincing story. When we had held meetings the one criticism for which we had no answer – other than ‘trust us, guys’ – was about our ability to deal with a down market.”

Even before the final price was set, Taqi, by then CFO, was unhappy with the valuation. “We seriously contemplated pulling the deal,” he says. “US$2.7bn – seriously?” The goal became to sell only a small amount of shares. Selling GDRs instead of opting for a premium listing on the London Stock Exchange allowed the selling shareholders, companies controlled by Damac chairman Hussain Sajwani, to sell less than 15% of Damac. GDRs are “not the best-liked instrument in the world”, Taqi says. “But we did it for a reason.”

Home again
Moving from the London Stock Exchange to the Dubai Financial Market is now “an obvious development to the growth of the company”, Taqi says.

“Our assets are here, our revenues are from Dubai, we’re a household name in Dubai – and most of our investors would invest in Dubai anyway,” he adds. “GDRs are a great solution for where people don’t want to go in [the issuer’s] jurisdiction, but virtually all our investors are investors in other [companies] in Dubai.”

Last year saw an upturn in regional listings, although stock exchanges in the Middle East have seen prices drop as worries mount over a slump in the price of oil. Damac’s shares listed in Dubai at AED2.79 (about US$0.76) in January and have risen as high as AED3.38 since. “Over the long term, as we build, if you look at the next 12, 18, 24 months I think our shareholders should be very happy,” Taqi says.

Indeed, the company’s 2014 results showed a total cash pile of almost US$1.8bn. “We understand that from a narrow treasury point of view that’s going to cost us some money, but given the operating margins we generate I think that money is very well invested if you keep it on the balance sheet for a couple of years and then time your opportunities to buy land and go into deals,” Taqi argues.

Damac has made it through tough times before. If real estate prices were to fall this year – analysts at real estate company JLL say residential prices increased at “an unsustainable level” in recent years but stabilised the second half of 2014 – shareholders could yet be thankful for the CFO’s conservative approach to running the company’s finances.