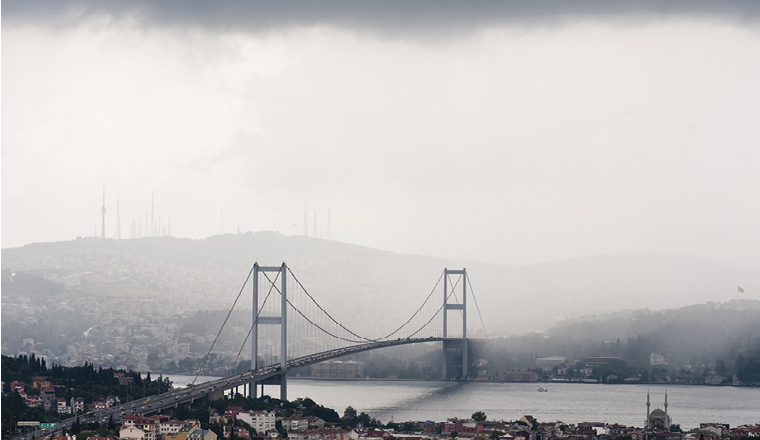 Turkey has long been regarded as an attractive credit story by emerging market  investors, but uncertainty at home and abroad is colouring the country’s funding outlook.  Richard Willsher reports.

Last year we saw 25 bond issues for Turkish credits totalling USD 17 billion,” explains Kubilay Ozturk an economist at Deutsche Bank who covers Turkey. “Then it was business as usual until April of this year, when I saw transactions totalling $6bn. After that there was a slowdown.”

He explains that the reasons are, the inconclusive Turkish elections, the lack of clarity on the US Federal Reserve’s interest rate decision and in Europe, the Eurozone Greek debt crisis. “All of these factors have been negatively impacting the mood. So since then market pricing has not been attractive for borrowers so they have put their fund raising on hold.”

While several Turkish banks, including Yapi ve Kredi Bankasi, Garanti Bankasi, Isbank and Akbank raised funds in the market between March and June, which were well received, they seem to be becalmed now.

“We are in different times than we were six months ago,” says Hugh Carter head of Credit Syndicate at Commerzbank AG, “because of the politics and the proximity of hostile nations next door. So we have  not seen any Turkish bond issuance recently and that will probably be the case until we see some kind of political settlement.”

New elections are scheduled for 1 November. However there is a certain amount of pessimism in many quarters about whether the outcome will be sufficiently conclusive and if it will open the way for a new-look Turkish government, perhaps a coalition, with new and convincing ideas for managing the economy.

Credit rating agency Moody’s Investors Service, ascribes a Baa3 rating to the sovereign, one notch above junk status and has a negative outlook on the country. In their latest research dated 27 August the rating agency reports, “Another round of elections so soon after the previous elections is credit negative for Turkey because a prolonged period of political uncertainty will delay the implementation of economic policies needed to reduce external vulnerabilities, improve the investment climate and reactivate economic growth. In an environment characterised by heightened geopolitical risks and elevated aversion to emerging market risk, policy inaction exacerbates the risk of an external shock leading to financial instability.”

Fitch Ratings takes a more positive view with the same rating – BBB- foreign currency long-term - but with a stable outlook. In its most recent Full Rating Report dated April of this year it said, “Despite significant political noise around economic policy making in recent months, Fitch believes that the key factors that led it to upgrade Turkey to investment grade in November 2012 remain intact.” And we should not lose sight of the fact that Turkey does have many positive factors to support its credit case.

Bearing in mind that many of the best known issuers come from Turkey’s banking sector Alain Checri from Commerzbank’s international bank bonds desk notes, “Turkey has been growing strongly for many years and it has been raising money for infrastructure on the longer end and putting it on the balance sheets of banks and they are now trying to address the liability mismatch. They were financing long-term assets with short-term debt and deposits. Now this has changed. Most of the issuers have not only issued bonds but have set up programmes for bond issuance which means that they are intent on issuing more than once every year. They are also using private placements to meet their funding needs, so it is not only benchmark issues, we have seen a lot of private placements albeit at shorter maturities.

They are also working on longer maturities by the use of covered bonds,” says Checri. “The government has now authorised the banks to use new instruments which has been incorporated into local legislation and this has contributed to lengthening the tenor of the debt. And in any case the banks won’t be able to find longer-term money on the domestic market which is short term.

Lastly, Turkey is still very much under banked. The potential for development in the banking sector and growth in the financial sector is quite huge. You have a young population as well, the development potential for the country itself is quite important. If Turkey can establish stability to its political process I’m sure that it will be back. Especially if commodity prices stay low as this helps the current account which has been chronically in deficit for a long time.”

One of the key uncertainties in the Turkish outlook is the depreciation of the Lira (TRY). The currency has fallen in region of twenty-five percent against the dollar and euro since the beginning of this year. This has a number of significant effects.

Firstly, although commodity prices and particularly oil have fallen and softened Turkey’s current account position, the weakened currency has blunted this advantage. Secondly, other imports, particularly from the EU, which is Turkey’s main trading partner, have increased in price. Thirdly, the knock-on for bank balance sheets is concerning.

The relatively low savings ratio means that banks are highly indebted in foreign currency whereas their revenues and their capital are denominated in TRY. “[Currency] Depreciation means that company balance sheets will be stretched and that could feed through to the banks through higher non-performing loans,” Aykut Ahlatcıoğlu, research vice president at Oyak Securities in Istanbul tells EMEA Finance. “Also, capital adequacy could be an issue, too. However, these are indirect impacts. I think the main determinant of ability to raise debt is still availability of global liquidity.”

Ever since the 2008 financial crisis Turkish banks have been keen to highlight that they were well-capitalised and did not need the government support that was required by so many banks in the major western economies. While the current economic, political and currency situation is unlikely to alter that, it does challenge their clean, profitable image.

“Banking in Turkey is not as profitable as it was a couple years ago,” continues Aykut Ahlatcıoğlu. “Some of the reasons are transitory, but there are some structural factors at play too, such as more competition in both lending and local funding. Deposits in particular are a scarce commodity here.”

All this adds up to market uncertainty for Turkish borrowers in the market place given the preponderance of banks among the Turkish fundraisers in the international capital markets.

The 1 November elections will be closely watched by foreign funders as well as by local borrowers. However the consensus among those who follow the market is that the outcome of the election will not immediately bring Turkey back to the markets.

Commerzbank’s Hugh Carter says that the election of a suitable coalition could result in Turkish bank refinancings. But Oyak Securities’ Ahlatcıoğlu suspects that if there is a hung parliament, immediate action is unlikely, saying that there will need to be a coalition agreement prepared which could take a while to reach. But more profoundly he says that Turkish political affairs and policies have been conducted in a certain way for 12 or 13 years, a new form of government may wish to revamp its economic management. While a possible coalition would likely include the long-ruling AKP party, a power-sharing coalition, albeit pro-market, would be likely to take some time to bed down. This could however add another layer of unpredictability in the short term.