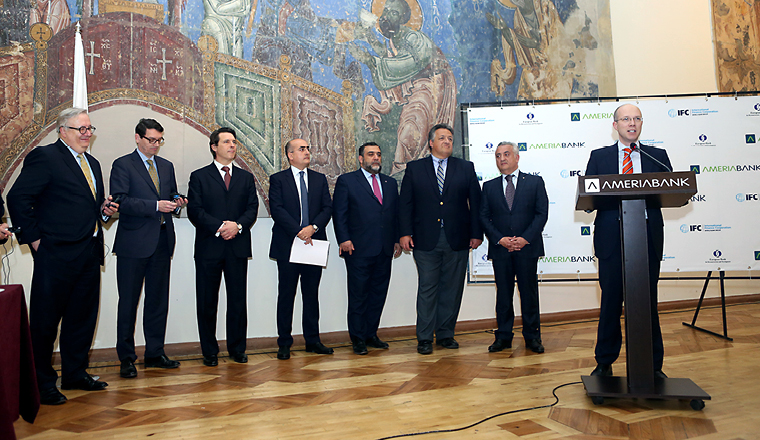 Ameriabank, Armenia’s largest bank by assets, secures funding that should drive consolidation and drive interest in its planned IPO.

Both financing commitments will boost Ameriabank’s capital base, allowing it to increase lending, and help it to prepare for an initial public offering (IPO) planned later this year. There is the prospect that the bank might pursue a strategy of mergers and acquisitions in the local market, leading to further consolidation in the Armenia’s banking sector.

Ameriabank has grown steadily in recent years despite sluggish economic conditions. It now has total capital of nearly US$200mn while its assets have topped an important milestone of US$1bn at the end of 2015.

The bank believes that further consolidation is now likely and that this will not lead to any monopolisation of the market because the top five banks account for nearly 50% of assets combined.

Last year, Tigran Jrbashyan, partner, development director and head management advisory at Almeria Group, acknowledged that there would be further mergers and acquisitions in the sector over the next two years, arguing that this would benefit its stability and efficiency.

“This process will greatly help improve our banking system, and I believe that in 2017 we will have a qualitatively new banking system with new possibilities and quite different profitability ratios, which will be ready to attract new capital and provide financing,” he said.

In September 2014 Ameriabank secured a US$20mn convertible subordinated debt deal with Dutch development bank - the FMO, which represented the first deal of its kind between an Armenian bank and an international development finance institution.

Ameriabank has also worked with the Austrian Development Bank in offering funding for renewable energy projects and energy efficiency in Armenia.

According to the IFC, its latest subordinated loan deal will further increase the stability of Armenia’s banking sector and support Ameriabank, a partner bank, in its goals to grow and prepare for an IPO.

“By providing capital support to one of our key partner banks in Armenia, we endorse its growth strategy and future plans,” said Tomasz Telma, director for Europe and Central Asia at the IFC. “This cooperation is part of our efforts to increase the stability of Armenia’s banking sector, which is critical for broader economic development.”

EBRD also expects its investment to strengthen Ameriabank by providing it with additional funds for lending to large corporate and private customers, small-to-medium-sized enterprises (SMEs) and retail customers, thereby boosting the local economy.

“We welcome the opportunity to become a shareholder in Ameriabank and see this as a further step towards strengthening and consolidating the local banking sector,” said Mark Davis, EBRD head of the Yerevan office. “Increased access to finance is key to enabling local companies to realise their potential. As a shareholder, the EBRD will support Ameriabank’s development, with a special emphasis on corporate governance.”

Ukraine’s Ministry of Finance announced it had completed the country’s debt restructuring of around US$15bn with creditors – 13 series of sovereign and sovereign guaranteed eurobonds. It is still trying to find a debt solution on a US$3bn eurobond with Russia.

“Today, we close one important chapter in Ukraine’s economic history and open another. Few thought we would get to this point when we launched this process eight months ago. The successful conclusion of our debt restructuring process, completed while avoiding default, leaves Ukraine’s economy in a much stronger position and is an important prerequisite for our return to growth,” Ukrainian Finance Minister Natalie Jaresko said.

Some US$15bn of Ukraine’s external debt has been restructured, achieving a 20% debt reduction, that is around US$3bn. Hence Ukraine will not have to pay US$8.5bn in bonds due before the end of 2018. The debt restructuring is part of the country’s IMF-supported Extended Fund Facility (EFF), which is the fundamental framework behind the US$25bn in official financial support being provided to Ukraine approved in March 2015.

“The terms of the new sovereign notes issued today include contractual provisions which prevent Ukraine from paying such eurobond in accordance with its terms or settling with the holders of such eurobond on terms more favourable than those received by participating bondholders in the just-completed exchange offer,“ the Ministry of Finance explained in a statement.

From the 14 series of eurobonds only one did not participate in the exchange offer. It is the eurobond held entirely by Russia maturing in December 2015. The Russian government refused to support the debt operation, arguing the debt has the status of an official loan as opposed to a commercial one.

Ukraine’s other bondholders, led by Franklin Templeton, accepted a 20 per cent principal write-down, will receive new securities with a coupon increase to 7.75 percent, a four-year maturity extension with new maturities between 2019 and 2027 as well as GDP warrants.