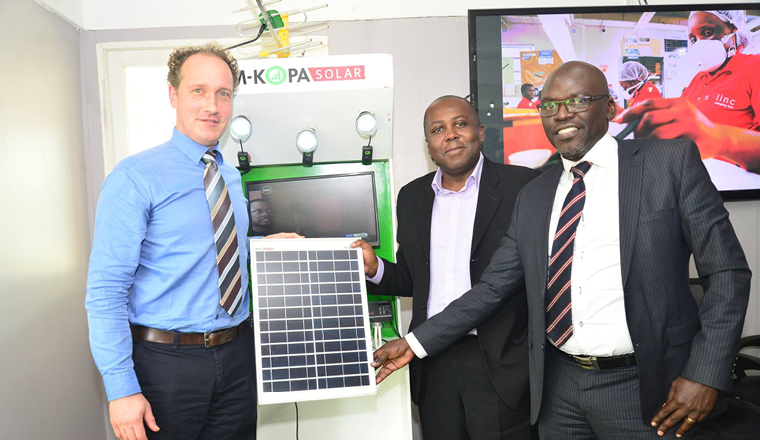 M-Kopa shines with record loan to off grid firm

The debt financing will be used to fund the next wave of expansion for the company. It is split between a US$55mn-equivalent syndicated loan denominated in Kenyan and Ugandan shillings led by Stanbic Bank, and a US$25mn loan from three emerging markets investors.

“We took out two separate facilities [as part of the Stanbic-led financing],” Jesse Moore, chief executive and co-founder of M-Kopa told EMEA Finance. “One in Kenya for US$40mn Kenyan shilling equivalent and one in Uganda for US$15mn Ugandan shilling equivalent. Each loan matures in 2021.”{mprestriction ids=“*”}

Stanbic provided a US$9mn-equivalent ticket to its facility and was joined by Dutch development bank FMO with US$13mn-equivalent and Norway’s Norfund with the same sum. UK development finance lender CDC provided the largest ticket with US$20mn-equivalent stake. The lender has been a supporter of M-Kopa for a while, having participated in a 2016 equity raise for the solar company.

CDC’s chief executive Nick O’Donohoe called M-Kopa a “remarkable company” and M-Kopa could well turn to CDC for future financing, as the lender said at the tail end of last year that it is looking to deploy up to US$150mn to the off grid solar sector in Africa.

Essential Security
Nairobi-headquartered M-Kopa provides solar energy generation technology that does not run on the national grid, also known as ‘off grid energy’. The firm used an all asset pledge in Kenya and Uganda as security against the Stanbic-led loan, alongside share pledges at the two entities.

“Also,” said Moore, “[we] had a separate credit enhancement, including a DSRA and a cash collateral account.”

A debt service reserve account (DSRA) acts as a cash buffer for borrowers and an extra layer of security for lenders. In practical terms, a borrower will keep a cash supply equal to an agreed amount of months’ repayment for the interest and principal repayments of a loan. The DRSA is then used to help smooth out any periods where available cash falls below what is needed to service debt payments.

“Over the past year, Stanbic and M-Kopa have worked collaboratively to design a facility that reliably funds M-Kopa’s growth in local currency, while providing considerable safeguards for the lending syndicate,” said Chad Larson, chief credit officer and co-founder at the solar company.

The Stanbic-led loan is the largest ever debt financing for an off grid borrower, according to Stanbic and M-Kopa Solar.

M-Kopa will turn to the loan market again, albeit at the parent company level.

In Kenya, roughly half of the population has access to electricity. This plunges to as low as 5% in rural areas, which instead uses fire wood as the main source of energy.

The figures in Uganda are even more problematic, with just 14% of the population able to access electricity. In rural areas, 7% of people have access, though this is largely off the national grid and provided by generators, car batteries and solar photovoltaic units.

Stanbic estimates that because so much of Africa’s population lives in remote areas, national grid coverage “could still be decades away”.

However, things are changing. M-Kopa’s successful financing could act as an encouragement for other commercial loans to similar companies, as once the company starts paying back the loan, there will be data on default rates – a crucial component in lenders working out the risk financing in the future.

Furthermore, the technology is improving, both in capability and affordability, with most solar units being the size of an A4 piece of paper.

This “has resulted in businesses like M-Kopa no longer having to rely solely on equity funding like other start-ups,” said Stanbic. “Instead, the affordability of the product, along with the scale of take up, means that M-Kopa has been able to expand its funding sources to include substantial commercial bank finance.”

M-Kopa operates through mobile payments, which has become a hugely popular way to transfer money for under-banked East Africans since it was introduced in 2007.

Across all of Africa, there are 100 million active mobile money accounts, equal to one in ten African adults, according to management consulting firm McKinsey.{/mprestriction}