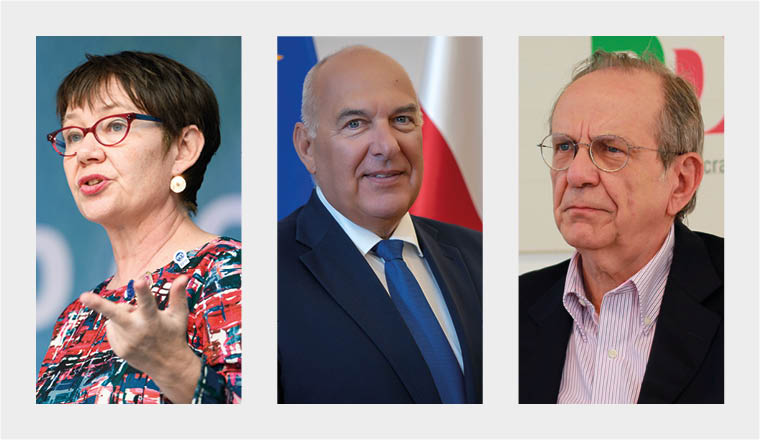 The seventy-one countries who hold shares in the development bank that promotes private enterprise first in Central and Eastern Europe, and now much further abroad will choose the new president at their delayed annual meeting in October.

Given that the European Bank for Reconstruction and Development was born out of the economic crisis following the collapse of Soviet communism, it should be no surprise that the handover of control of the organisation tends to come at times of turbulence.

Thomas Mirow began his presidential term during the 2008 global financial crisis while Suma Chakrabarti took over the reins at the height of the European debt crisis in 2012.

A new president to replace the Indian-born British civil servant should have started his or her tenure in May but the outbreak of the Covid-19 pandemic put paid to that.

Instead the 71 countries who hold shares in the development bank that promotes private enterprise in central and eastern Europe, central Asia and more recently North Africa and the Mediterranean will choose the new president at their delayed annual meeting in October.

The horses are on the track

Vying for top job are three candidates: Poland’s Tadeusz Koscinski, the Italian Pier Carlo Padoan, and Frenchwoman Odile Renaud Basso. The election will be held in a closed session of the Board of Governors, with governors voting by secret ballot.

Until Chakrabarti beat Mirow and three other rivals in 2012, the presidency was mostly a matter of political horse-trading behind closed doors, with the nationals of France and Germany alternating in the top spot, according to Mikaela Gavas, co-director of development cooperation in Europe at the Center for Global Development (CGD) thinktank.

“There is no doubt that the choice of the next president of the EBRD will have important real-world consequences, as the bank faces an uncertain future on several fronts,” she says.

The EBRD faces challenges shared with other international financial institutions over how to help with the economic recovery in the wake of Covid-19 and how to meet the UN’s goals for tackling climate change.

However, it has its own unique issues. The first is the proposed expansion of the bank into sub-Saharan Africa (SSA) and the second is the so-called “wise persons group” on the future of the European development finance architecture, and in particular, the roles of the EBRD and the European Investment Bank.

The move into SSA has divided members into two camps with some seeing this as an opportunity for the EBRD to apply its experience in a troubled region and others saying the mandate of helping former Soviet states is being diluted.

Basso, head of Treasury at the French finance ministry, says the SSA region is very important for Europe. “It’s an issue of stability of the neighbourhood of Europe, so I think in that respect it makes a lot of sense for the EBRD to look at what it can provide,” she told CGD in a series of pre-election interviews.

However, she insists the EBRD must stick to its mandate of focusing on the private sector and fostering democracy. “It’s a bank which can develop very small projects, has an ability to intervene in very different kinds of projects, and that can be very effective in sub-Saharan countries. My approach would be to focus on some countries in which it would make sense, not to aim for a global enlargement of the mandate.”

Padoan, a member of the Italian parliament and a former finance minister, also sees the SSA as a “priority region” for Europe, although he says intervention has to be done “carefully”. “I think that there is a possibility and scope to consider in a selective and a specific way some countries in the region to be considered for intervention.”

The candidate from the CEE region, Polish finance minister Koscinski takes a more sceptical view, saying the EBRD should focus on the areas it works in such as the West Balkans, and central and southern Europe.

All three appeared dubious about the idea of a merger between EBRD and European Investment Bank as a way of consolidating Europe’s development finance function. Koscinski said the EBRD’s political mission — its constitution specifically mandates promoting market-oriented economies – meant it should take the lead on work to help governments change policies.

For Padoan, a former economics professor, the two institutions should focus on their comparative advantage but interact with one another, adding: “Let’s see where the overlap can be eliminated if it is a cost.”

Basso echoes that, saying that the two institutions have different mandates and ways of intervention in the countries they work in. “In my view, what is clear is that the two banks have very different features: the EIB is purely European, and the EBRD is international, multilateral with strong European participation and strong European backbone.”

Whoever wins will gain control of a major international financial institution: last year the EBRD committed to 452 projects with a total value of €34.9bn.

In April it unveiled a €21bn fund to fight Covid-19. Manoeuvring the region’s economies out of that crisis will dominate the start of their four-year term.

The EBRD reported in September that output in the regions it serves has contracted by 8.2% year-over-year in the second quarter due to the severe impact that the pandemic has had and is having on both supply and demand across the macroeconomy. Almost no sector is being spared with the bank reporting that effects are “compounded by weaker demand for exports, a collapse in tourism, a drop in remittances and low commodity prices”. The bank also reported that: “All EBRD investments in 2020-21, worth €21 billion, are already committed to helping these countries counter the economic effects of the coronavirus pandemic.”